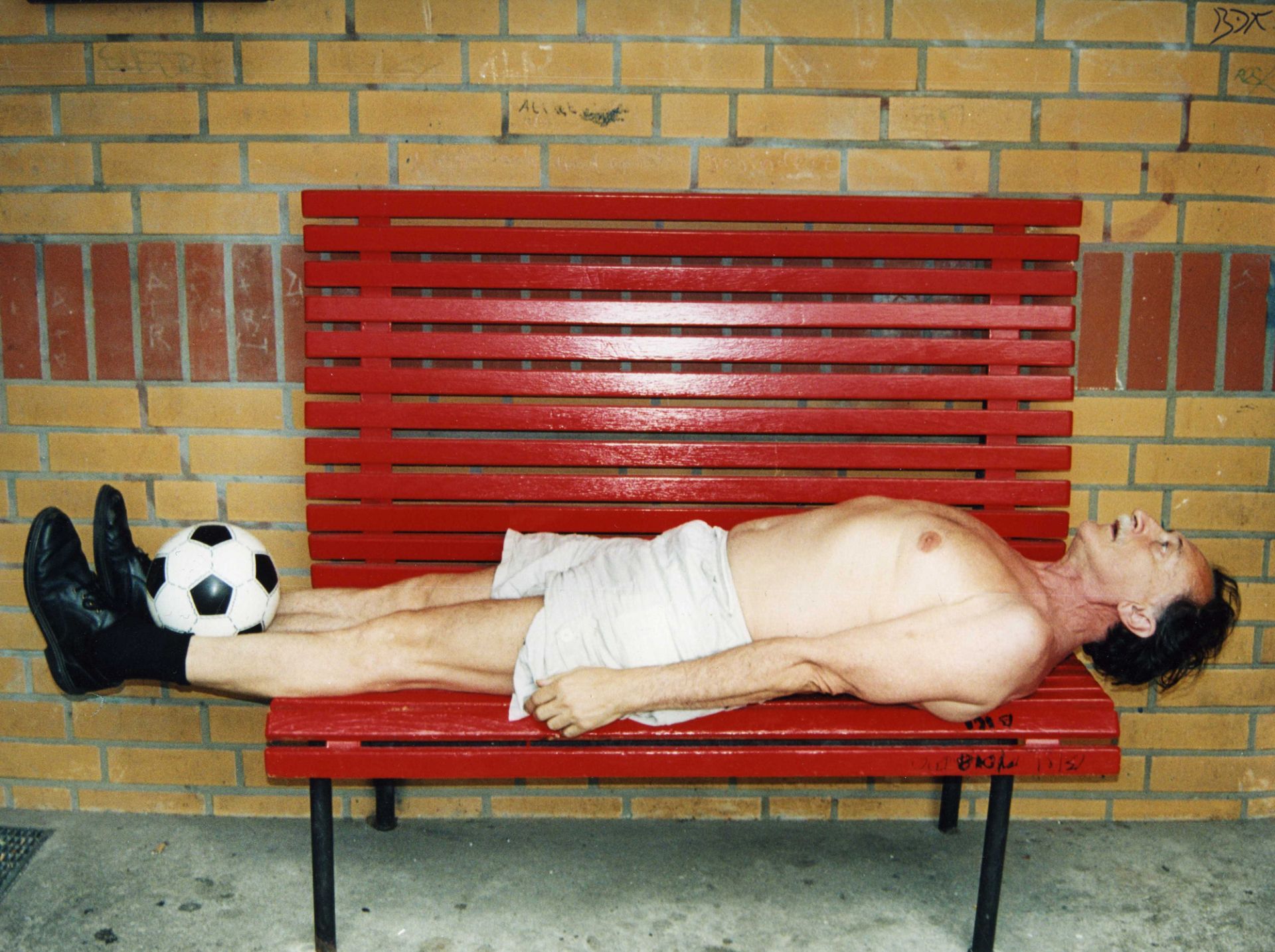 Boris Mikhailov (b. 1938, lives in Kharkiv and Berlin) is the artist who put the city of Kharkiv on the world photography map. A Hasselblad Prize laureate whose work has been exhibited in big-name world museums, he was the engine of the Vremya group and a key figure in the emergence of the Kharkiv School of Photography. On a continuous search for new ideas, always discontented with the result and demanding more from his own work, Mikhailov articulated the most important words in the new visual language of the Kharkiv School (watch Boris Mikhailov on KSP).

Overlays (1968—1981), or 'superimpositions’, or 'sandwiches', as he sometimes called them, were probably Boris Mikhailov’s first invention on the way to new and more complex means of visual language. The artist says that when he intended to take a look at newly developed slide films, he incidentally put two of them together and was stunned by the effect. The images looked formally new, surrealistic, and grotesque. The technique produced a result similar to multi-exposure but allowed clearer detailing and freed the artist’s hands for countless combinatory possibilities. Two overlaid color slide film frames were either screen-projected in a slide show or printed on color photo paper. Mikhailov's work in this technique, as in all his œuvre, has an acute social focus. 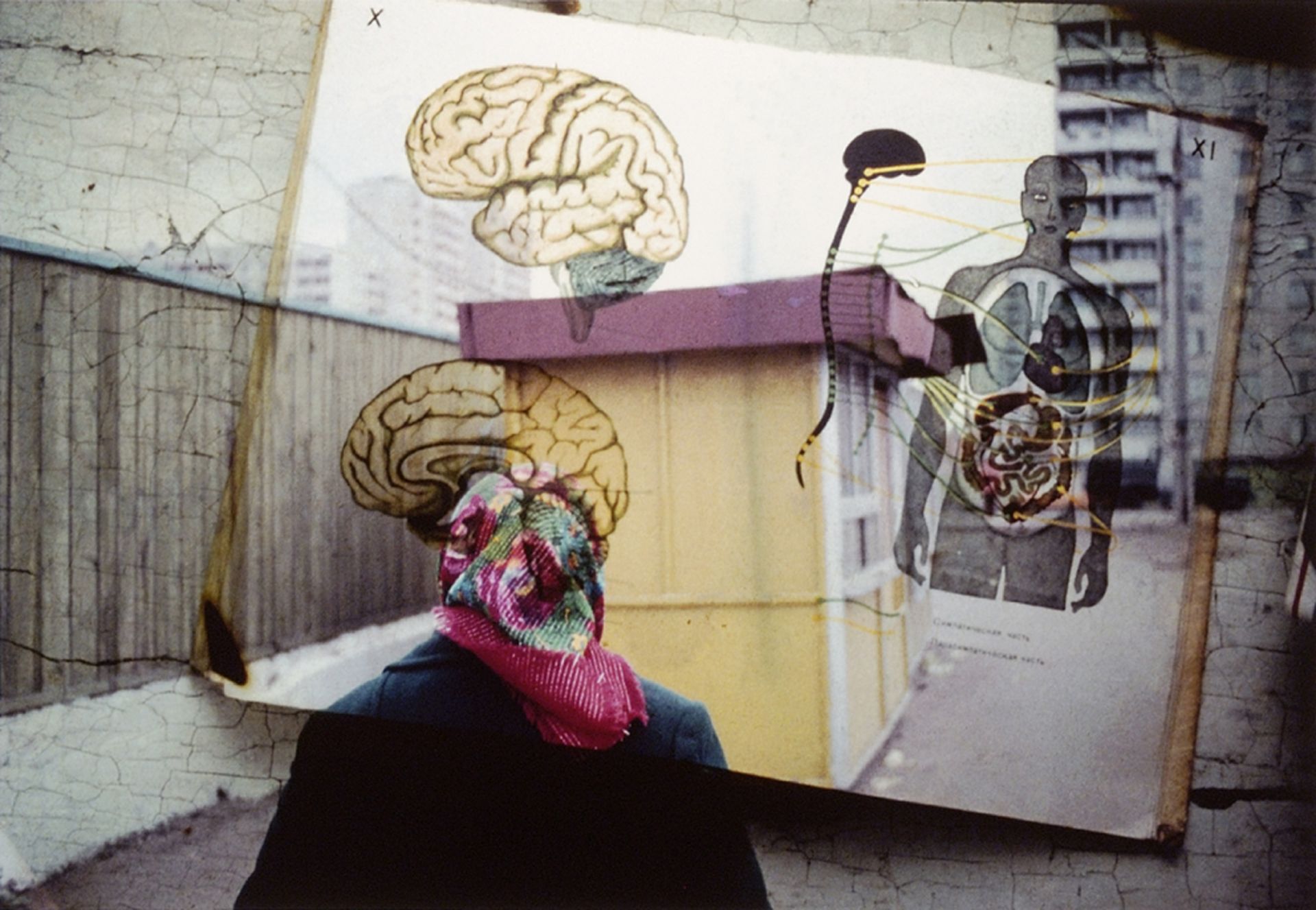 Mikhailov's Red Series (1965—1978) assigned an additional meaning to the red color favored by the Communist party's decorators, making it the color of feigned loyalty and simulated enthusiasm. Even innocently occasional red objects in this series appear repulsive and annoying.

In the 1980s, Boris Mikhailov offered a conceptual alternative to the sophisticated techniques of other Vremya artists. He claimed that a high-quality glossy image was unable to depict the Soviet reality with its poor living standards (including poor quality of Soviet-made film, paper, and chemicals), and suggested the concept of "bad photography for bad reality". Instead of full tonal images, he produced small sloppily printed black-and-white photos, often blurred, low contrast, showing film defects or perforation. "Mikhailov introduced 'bad photography' as a method to undermine the Soviet compositional canon and the optimistic narrative that the canon served to represent. For Mikhailov, depicting the Soviet reality at the moment of its irreversible and violent break-up, 'bad photography' became a tool of aesthetic and social critique’" (Iryna Sandomirskaya).

This method was later used in Mikhailov’s famous Unfinished Dissertation (1984, published as a book in 1998), where black-and-white images, pasted on the back of someone’s lecture notes were accompanied by hand-written autobiographical and philosophical comments. Margarita Tupitsyn wrote in an essay appended to the book, "Mikhailov saw no point in providing an explicit critique of Soviet society, either through mocking it or through unmasking its endless vices. Instead, his goal was to preserve Soviet reality’s sense of totality, but without its layer of systematically sustained external joy."

Some critics believe it was the first example of conceptualism in photography in the USSR: "In fact, only in Kharkov, under the guidance of Boris Mikhailov, did photographic conceptualism actually flourish in Russia," John P. Jacobs wrote. Until 1990, he maintained, "photographers throughout the USSR, including Moscow, remained hostile to the union of photography with conceptualism."

© Boris Mikhailov. By The Ground

In the early 1990s, Boris Mikhailov made a significant contribution to his 'bad photography' concept. Two large panoramic documentary series of chemically toned black-and-white images. At Dusk (1993) and By the Ground (1991), a.k.a. The Blue and The Brown Series, used stains and other defects of color toning as a visual representation of the deteriorating quality of post-Soviet life.

In the 1970s, Kharkiv photographers often earned a living by copying and enlarging people’s family photographs. It was an illegal commercial practice commissioned by people living in rural areas, often in remote parts of the country where color studio photography was either too expensive or simply non-existent. A specifically Soviet product, a 'lurik' in photographers’ jargon, was a mounted or framed enlarged and retouched hand-colored portrait, postmortem portraits included. Family or passport photos by origin, they often carried instructions to the photographer: to remove a hat or add more hair, make a montage combining people from different images in one photo of a would-be family, etc. Boris Mikhailov conceptualized these pathetic examples of true folk art in his Luriki series (1971—1985), "the first strategic use of found material in contemporary Soviet photography" (John P. Jacobs).

Mikhailov’s scandalous I am not I (1992) series of nude self-portraits was first shown in Kharkiv in 1993 in the Up/Down Gallery, an unofficial private art space run by Sergey Bratkov. Later, when Mikhailov attempted to exhibit this work in the municipal Kharkiv Fine Art Museum, the show was closed on its opening day. An interview with the Museum Director can be watched here (courtesy of In-hibition Project, Curators Lesya Kulchinska, Serhiy Klymko, Center for Visual Culture, 2013). Next year the series began its triumphant march through the world’s galleries and museums.

In the late 1990s, Boris Mikhailov began his internationally famous Case History project (1997—1998) that has been exhibited in the most prestigious art spaces around the world. It demonstrated the miserable condition of a whole stratum of post-Soviet society, those incapable of adapting to the game's new rules after the collapse of the USSR. One of the project’s concepts that may have escaped critical attention lies in Mikhailov’s choice of homeless hoboes as nude models for the series' staged photos, where their desperately inept attempts at posing parody the forged glamor of prevailing visual culture.

Mikhailov’s Tea, Coffee, Cappuccino (2000—2010) appears to follow his socially critical work of the previous decades: his characters being again low-class drunks, hobos, and thugs, his images continuing to picture squalid city slums and dilapidated small towns. But the project reveals a novel view in documentary photography. When put side by side, these seemingly simple reportage color shots become pieces of a greater puzzle presenting a picture of the absurdity of Ukraine’s provincial reality.

The artist’s most recent Temptation of Death series (2019) employs images of the famous unfinished crematorium in Kyiv, Ukraine, in combination with his pre-existing images in over 150 diptychs. In this visual autobiography, Mikhailov’s narrative juxtaposes the past and the present reflecting on life and death. In 2021 the series won the Shevchenko Prize — the first official recognition of Mikhailov's work in Ukraine.